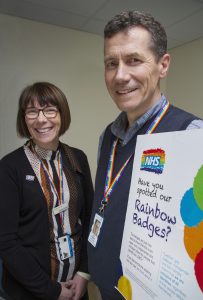 NHS staff have launched a new scheme to promote a positive message of inclusion for LGBTQ+ patients and colleagues in North Tyneside.

Members of staff in GP practices across the borough have been signing up to wear a specially designed NHS rainbow badge to show support for all who identify as lesbian, gay, bisexual, transgender and all other identities (LGBTQ+).

Dr Ruth Evans, a local GP and Medical Director at NHS North Tyneside Clinical Commissioning Group said: “Simple visible symbols such as the rainbow badges can make a big difference for people who are worried about the reaction they might get if they disclose their sexuality or gender identity.

“It shows that the wearer is there to listen without judgement, and is aware of the issues that LGBTQ+ people can face when accessing healthcare.”

A recent survey published by Stonewall stated that lesbian, gay, bisexual and transgender (LGBT+) patients face inequalities in their experience of NHS healthcare. The survey estimates that one in five LGBT+ people are not out to any healthcare professional about their sexual orientation when seeking general medical care, and one in seven LGBT+ people have avoided treatment for fear of discrimination.

Dr Evans added: “The rainbow badges symbolise the recognition that, as people who work in healthcare, we can play a key role in making things better for all patients, regardless of how they define themselves.”

The scheme has received strong support across North Tyneside, with over 170 members of staff proudly wearing a rainbow badge.

Dr John Matthews, a GP at Park Road Medical Practice in Wallsend said: “Past experiences of prejudice or discrimination can make it very difficult for patients to discuss issues relating to gender or sexuality.

“By choosing to wear the NHS rainbow badge, our members of staff are providing a clear sign that they can be approached without fear of judgement or intolerance.”

The rainbow badge initiative was first introduced by staff at Evelina London Children’s Hospital and has since been adopted by various NHS organisations across the country.